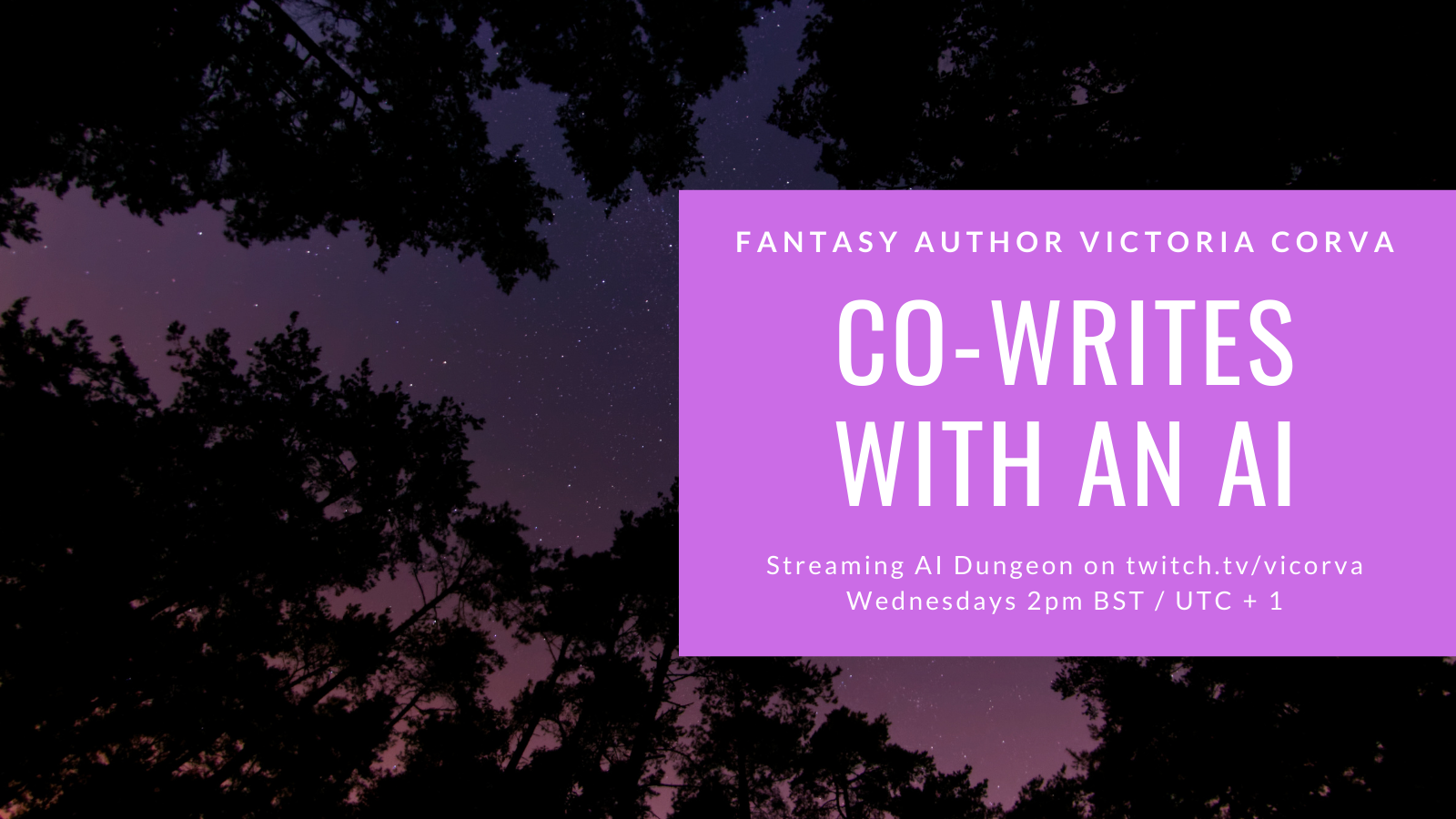 (No voice audio until 10:15 due to technical issues. Sorry!)

You are a blacksmith in the village of Blackwater. You are travelling back home after visiting your aunt in the next village over. It is late and you are tired from the long walk. A full moon wreathed in mist shines down on you through the trees reaching above the path. You hear a growl; something large and hairy emerges from the trees onto the path before you. A hulking wolf-like creature, twice the size of you, with golden eyes that glow in the moonlight.

You suck in a sharp breath, a hand going to your heart. You’ve heard rumours of a great black wolf creature that haunts the lands around Blackwater, but you’d never heard anything about it talking. Its words comfort you somewhat, though you cannot completely shake your nerves at the sight of its long yellow teeth.

“I’m just travelling home,” you say. “I don’t mean you any harm either. My name is Nero. I live in Blackwater, just up the road.” You think to point, but the wolf-creature’s gaze unnerves you, and your hand remains at your side. “Please, just let me be on my way.”

The beast lets out a bark of laughter.

“You look hungry,” you remark.

The Wolf stands motionless, golden eyes fixed on you.

It is still standing directly in your path. “Well, it was nice meeting you,” you say awkwardly, for want of anything else to say to an enormous wolf-creature. You summon your courage and attempt to edge past it, mentally cursing the thickness of the forest to either side.

The beast’s body naturally blocks the path forward. You can’t quite seem to find enough space to comfortably squeeze past, and you stagger back a few steps.

The Wolf turns and barks once more, golden eyes shining in the moonlight. “What was that, little one?”

“I … nothing,” you say. You hate everything about this interaction. You are exhausted. You are surely less than an hour away from home. And for some reason, you have been accosted by a mythical creature with a love for small talk.

Still. It doesn’t actually seem like it’s going to eat you, so … “I can’t get past you,” you say. “Would you mind stepping aside?”

The wolf-creature makes a grumbling sound you think might be assent and steps aside, the bushes rustling as it disturbs them. You feel shaky with relief as you pass it and it only watches you pass.

A moment later, you realise it is following you, only a few steps behind. An enormous, furry shadow.

You quicken your pace, anxious and unnerved.

Your heart judders in terror. Whatever had been keeping it so polite before is clearly over. You break into a run. “Please! Let me go!” You hear the creature give chase, its massive form crashing through the bushes after you.

Barely a second after you scream, you feel the whoosh of air as it passes overhead and lands heavily in front of you, panting. You skid to a halt, falling to the ground.

The creature stares at you. It has a mournful face, dominated by two blood-thirsty fangs above a pair of angry, orange eyes. “Why did you scream?” it asks.

You stare back, equally as incredulously. “Scream?”

The odd curiousity of its question brings you back to yourself. “I was afraid,” you say. “Why did you chase me? Why did you shout for me to stop? I told you before: I’m just trying to get home!” Your voice raises in pitch as you feel only moments away from a breakdown. This entire encounter feels like a nightmare you cannot escape. “Please,” you continue, “just let me go home.”

The creature watches you mournfully. “Go then,” it says.

You stand up, brushing yourself off and picking up your satchel. You walk home as quickly as you can. And when you glance over your shoulder, you see its back as it walks the other way, disappearing into the distance.

At home that night, you tell yourself that the creature is not real. That your strange encounter and stranger conversation was simply the result of exhaustion on an over-active imagination.

You slip into a deep sleep, and dream of golden eyes, long teeth, and the sense of being trapped.

The next day, you walk to the forest again. That night, it watches you.

Once the months have slid past, you begin to notice changes in the forest.

Its previous beauty is tainted by the twisted, oversized trees that reach skyward like grasping, mutated fingers. The undergrowth around them has largely rotted away, leaving only a dark mulch behind.

You try not to think too much about it. After your encounter with the mythical black wolf of Blackwater, this hardly seems the strangest thing to have happened. And you rarely have anything to do with the forest, though the other villagers do talk about it.

You throw yourself into your work at the smithy and hope that, like the wolf, the strange changes in the forest will soon disappear and the world will go back to normal.

One day, you receive a strange request at the smithy.

A travelling merchant has entered the village, and he’s seeking someone who might be able to craft him a custom item. He’s a well-dressed man, his clothes of good quality, though travel-stained, and he wrings his hands nervously as he speaks to you. “I’d like you to make me a dozen silver-tipped arrows,” he says. Before you can protest at the expense, he quickly adds, “I can provide the materials, of course.”

You study the merchant while you think over your response. He has long black hair slicked back away from his face and a sort of weasley look to his countenance. You’re not sure what exactly is making him so nervous. “I can do it,” you say, crossing your arms. “But the arrowheads will be soft. Not very practical. You’d do better with standard iron — I even have some already made.”

He shakes his head vigorously. “It absolutely must be silver!” he says.

Strange request, but one you’re willing to fulfill as long as he understands the risks. You give him a (somewhat inflated) price which he readily agrees to. He produces a silver goblet and hands it to you. “This ought to provide the silver,” he says. He holds it gingerly, as if it disgusts him in some way.

It’s a stunning amount of silver. You only nod, however, and when he leaves you get to work, wondering what on earth someone might want so many silver arrows for.

Later, while you’re hammering out arrowheads, you have another visitor. A stately woman with black hair holding a toddler in her arms enters the smithy. She smiles at you warmly. “Nero,” she says.

You don’t recognise the woman, or her child, and you are surprised she knows your name. Startled, you set aside your hammer and meet her eyes. They are bright gold.

Your hands curl into fists at your sides. There’s no way she can know you. No way…

She smiles at you warmly. “I’m sorry to just show up on your doorstep like this,” she says.