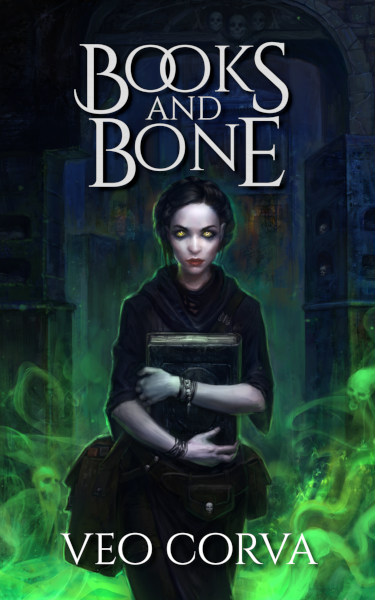 The others believe in blood and bone. Ree believes in books.

She manages the libraries and draws maps for the denizens of her hometown, a secret society of necromancers hiding in a sprawling underground crypt. Though they look down on her for not practicing their craft, Ree has bigger ambitions than raising the dead. She’s going to resurrect therianthropy, the ancient magic of shapeshifting. Or at least — she’ll do it if it really exists. And if she can find the books that prove it.

But Smythe, a chatty historian from the world above, stumbles into the crypt and takes a curse meant for Ree. Now she has to find a way to save him, keep the townsfolk off her back, and convince her necromancer parents that shapeshifting is a viable career path.

Ree is certain that if she and Smythe combine their scholarly skill sets, they’ll find the right books to solve their problems. But Ree’s search for power might put the entire town in danger, and her father and the other townsfolk want Smythe dead lest he reveal their home to a world that hates them.

and also available to order at most bookstores, online retailers, and libraries.

You can also read the first three chapters for free here.

“Probably the most appealing, and effective, aspect of the book is the deliberate contrast between the author’s humorous and rather wholesome approach to the story and the expectations a reader might have due to the setting— an underground crypt in which necromancy is the only game in town. That, of course, is a huge part of the fun.” – Emma Davis of Fantasy Book Review

“Although its setting not exactly cheery, there is something utterly charming in this book that just won me over. If you are looking for something unique containing magic, death people, queer characters and twists that you never saw coming, then you are in for a treat with Books and Bone.” – Timy of RockStarlit Book Asylum

“Books and Bone is satisfyingly long, draws on the author’s long association with DnD, and is genuinely humorous to boot.” – Libreture

“This story is sure to raise your spirits.” – TH Leatherman, Author of The Burning Son