#2 Co-Writing With AI Dungeon: Lore and the Trip to Market 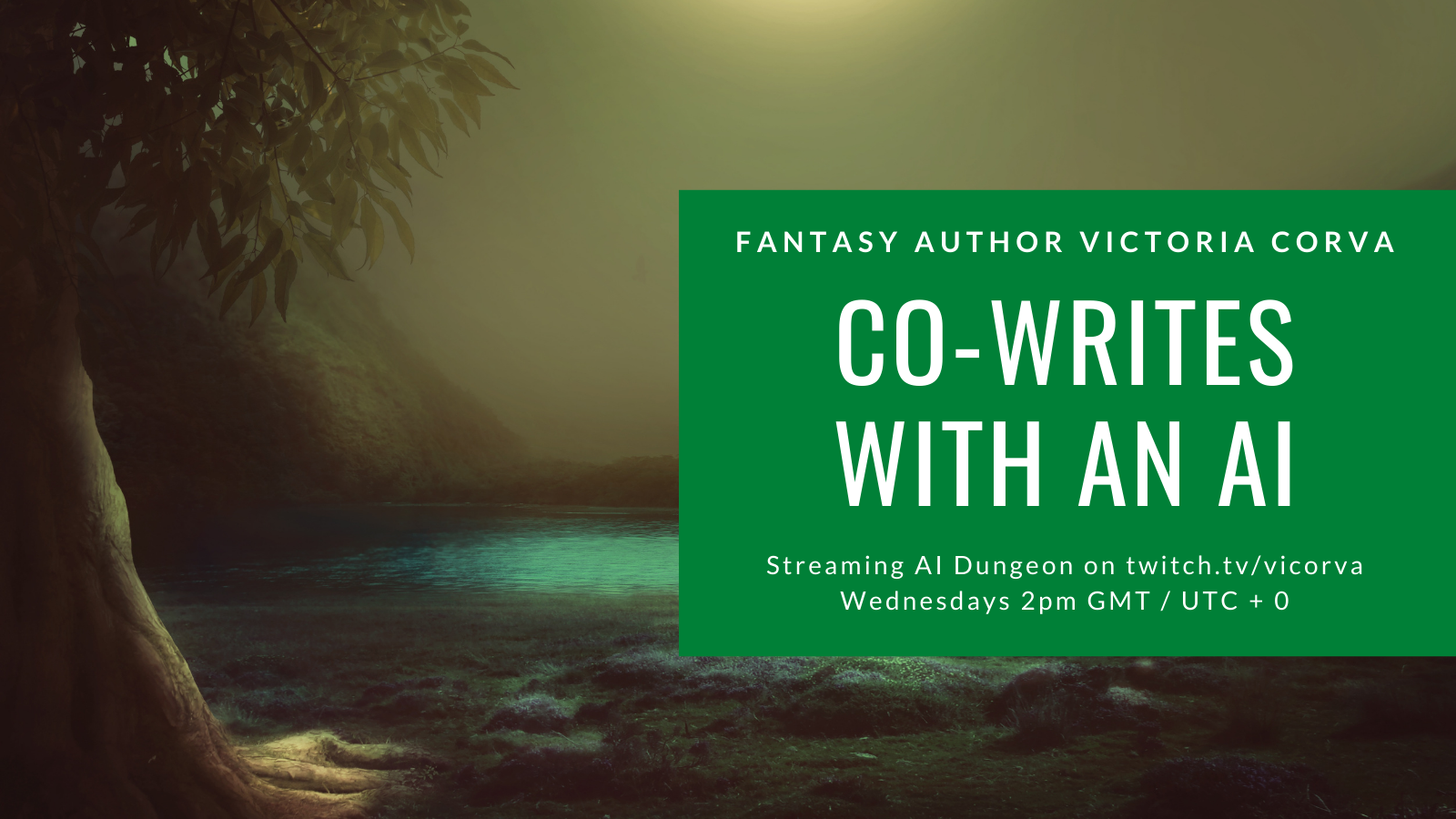 The energy binding the cuffs flares, and goes from a pale light to an angry, roiling red. Kae hisses, and you see the rings of energy around his wrist sizzle against his skin.

You grit your teeth, focusing your will on the spell. You must hold the blood and the energy together for the spell to work. Mentally, you wind the blood around the cuffs like thread around a bobbin. The magical cuffs grow darker, then, with a sound like a crack of electricity, the energy snaps and dissipates into the air. The cuffs are gone, and Kae is free.

Kae takes a deep breath, exhaling shakily. His hands rise up slowly, his gaze fixed on his own wrists. Where once there were threads of energy, you now see something almost like livid red tattoos. They seem to form a bracelet of script, but you do not recognise the language. Perhaps it is in some sort of fey language? Either way, it seems very beautiful to you.

“Thank you,” he says. His eyes flick up to meet yours, and there’s something strange in them. Your stomach shifts uneasily, and you take a step back. The power you had sensed locked inside Kae before now radiates from him as powerfully as heat from a raging forest fire. You want him out of your cottage as quickly as possible, and to put this all behind you.

“Well,” you say. “The cuffs are gone. That will be two hundred gold, as agreed.”

Kae’s eyes narrow, flicking over you and your small cottage. He starts to trace something in the air, green light trailing from his fingertip, but you quickly throw up your hands in warning. “Just the money,” you say. “No spells under my roof, thank you.”

He snorts softly. “You’re more twitchy than I would have guessed,” he said. “I suppose being mortal will do that to you. Fine. No spells.” He shrugged, and reached into his robes, then tossed two large pouches onto the table that clink when they hit. “That should be two hundred, or thereabouts,” he says.

You frown and go to check the pouches. You’re not sure how he could have been carrying them without jingling like a jester, but the coins seem real enough. “Thank you. Our business is done, then.” You try not to say it like a question, though you fear it might still be. This has been both too straight-forward and too complicated to truly be over.

Kae fixes you with a stare, as if daring you to say more. When you don’t, he finally nods. “Yes. For now, yes. I suppose we’re done.”

He leaves quickly after that, but you are tense for a long while after. As you sit by the fire that night, stroking a sleepy and puffed-up Soot, your mind fixes on the way Kae had seemed to have already lived through the encounter with you, or somehow known about it before it happened. You’ve heard stories about clairvoyance, but never really believed them. Is that what had happened here, or something more complicated? You also think a lot about his words ‘For now’. You fear you haven’t seen the last of Kae. Nonetheless, you settle your crow down for sleep and quickly find your bed. When you awake the next morning, you’ve almost put the whole ordeal from your mind. Almost.

In the weeks that follow, you go about your usual routine. You go for walks with Soot, harvesting useful ingredients from the swamp. You brew potions and check your supplies, readying yourself for a trip to city to sell your wares. You make good progress on knitting a new cloak for yourself, with only a few holes. No unexpected visits from strange men with magical powers. Indeed, no visits at all.

When the morning comes for you to set off for Morvel, the city, you find yourself looking forward to it. With your new riches (which thankfully, didn’t disappear as you had still half-feared), you can afford to hire a thatcher to fix your roof. You can maybe even get new boots, and some new toys for Soot. You pack your cart with the potions and charms you had worked so hard on and set off to sell them.

Along the way, you meet a traveller. A guard wearing a tabard with the Morvel coat of arms, on horseback, a longsword at his side. He looks you over and reins in his horse. “You, there. What’s in the cart?”

You try to remain calm. Encounters with the city authorities can be … uncomfortable, for a witch. Everything you do is perfectly legal, but superstition runs deep and the city guard are no exception. “Potions,” you say truthfully. “I’m heading to market to sell them.” Though you’d set off early, it’s already beginning to get light. You hope you get there in time to set up a stall, and that this guard will go on his way quickly.
He shakes his head. “No selling potions in the city, you don’t know the rules.”

“Go,” he says, pointing back the way you’d come.

You can see the barely concealed disgust in his tightly curled lip and the tense way he grips the reins of his horse.

You do know the rules. You’ve been selling your wares in Morvel for a decade at least. But you don’t think for one second this man cares whether what you’re selling is legal or not. He sees the black robes and the crow perched on your cart, and all he can think is “witch”.

You consider your options. You could probably enchant him to be more kindly disposed, but magic that alters the mind is morally rather dark and you try not to involve yourself with that sort of thing these days. You could argue with him, but you doubt it would get you anywhere good.

So, you decide to lie.

You turn your cart as if you’re about to leave.You walk a dozen steps, glancing back over your shoulder. The guard watches you go, silhouetted against the dawn sky. You grumble, wishing he was a little less attentive. “Soot?” You murmur. “Distract him, would you?”

Soot caws and takes off over your shoulder toward the guard.You turn around and begin to chant under your breath. Behind you, you hear the guard’s irritated cries and Soot’s frantic flapping. You suspect Soot is annoying his horse, and sure enough, a moment later you hear the thud of hooves join the guard’s shouts. You complete your spell, sketching three runes in the air which flash and then fade. You and your cart shimmer for a moment, as if seen through a veil of rippling water, then vanish. You pat the handles of the cart a moment, reassuring yourself that it’s still there, and turn it around. Invisibility is disorientating, but far better than missing the Morvel market after all your preparations.

The rest of your journey goes unimpeded, and you soon find yourself standing in the market district of Morvel.As you walk past the various stalls, you sweep your eyes over everything. The city is at the peak of its prosperity. You grab a few essentials: bread, cheese, fruit and wine. Rather more pleasant fare than anything you can make up yourself in the swamp. Then you find your spot, set up your stall, and begin your day of selling.

You sell potions of sweetbreath, vials of ebullience, and salves for itchy skin. You even make good business on your teas, which are largely unmagical but which you are rather proud of. All in all, you make a tidy sum. You wrap up in the late afternoon, thinking to seek out a thatcher and maybe a cobbler, as planned, when a familiar, tall, well-dressed figure appears at your stall.

“Sweetbreath? Really?” says Kae, holding up one of the potions and wrinkling his nose. “You must have a disgusting clientele.”

“Just a human one,” you reply tartly, but your heart is pounding. You don’t like this. Kae smiles, and you know he’s up to no good. “I wanted to speak to you about that,” he says. You glare at him. “I’d like to hire you.”

Your immediate response is not one that bears saying aloud to a powerful fey. You’ve had more than enough of Kae and you don’t intend to spend one more minute in his company than you have to. Apart from the threats and the cryptic words, he’s also just generally unpleasant.

“You remember this?” he says, rolling up his sleeves to reveal the red script that had appeared on his skin when you broke the magical cuffs. “Well, it turns out the cuffs were just the beginning. And as I paid you rather well to remove them in the first place …” he trails off, raising his eyebrows.