#VicorvaStorytime: The House Full of Faces 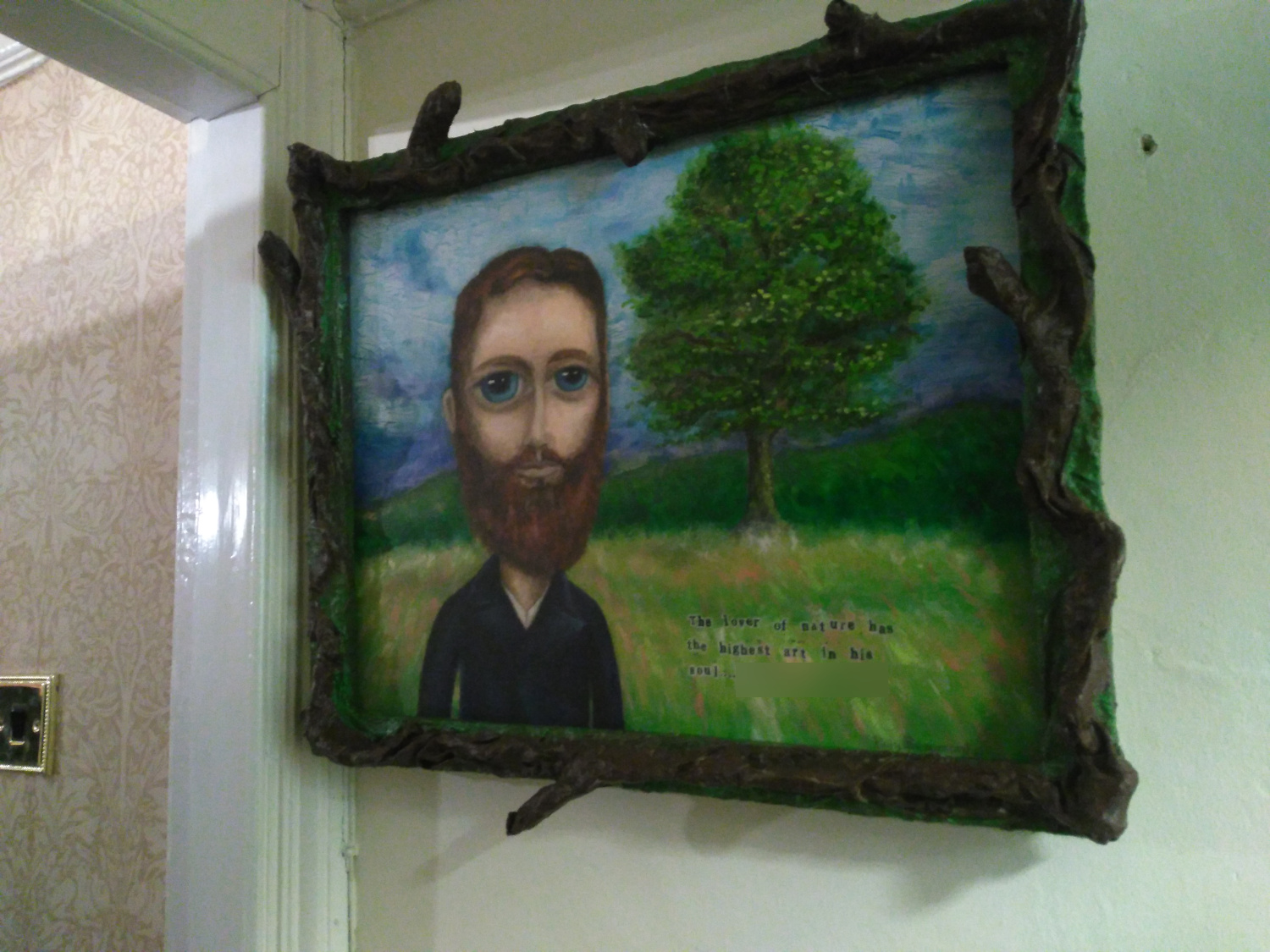 Have I ever told you about the time I went to a party in a house full of faces?

It happened this week, in fact.

It’s #VicorvaStorytime! CW for spookiness and a few pictures of manniquins and taxidermy.

This time, it has to be in a blog post. It’s just too long for Mastodon. After a hard month of crazed writing during NaNoWriMo, Joh and I were attending the TGIO (or Thank God It’s Over) Party.

The plan was to play board games and stuff ourselves with snacks and have a wonderful time with our fellow writing nerds.

This year it was in a new location, which had been offered to us for free by one of our participants.

Instead of going to a warm, familiar community centre, we were going to a museum. The converted home of a local writer, in fact.

Wary though I am of going new places (anxiety! Ahh, you make life difficult), I was still looking forward to it. The museum, a very old cottage, was the site of many local arts and writing events that I had never attended.

It would be a friendly, creative environment, I thought. An interesting place which we could explore in between games.

Well. It was definitely interesting.

On arrival, we parked in the small lot outside the museum, which was a few inches deep in mud and very slippery.

As we squelched out of the cars, all we could see was a few lights from the small windows of the cottage. The front door was open — invitingly, but in the way a murder cottage is inviting.

I was already feeling misgivings when I looked around at the grounds.

There were, it seemed, dozens of faces hanging from a distant tree.

I really hoped they could see the faces.

‘Huh,’ they said. ‘That must be from the tree decorating ceremony they held here earlier.’

As far as I could tell in this terrible light, they’d hung face-shaped paper-plates or something from the trees. We couldn’t make out the details; I sincerely hope it wasn’t ACTUALLY decorated with faces, but with shields or something similar.

But from here, they looked like dozens of pale faces hanging from strings.

To investigate further, we would have to squelch deeper into the mud, which we had not been expecting because it hadn’t rained much that day.

So, with the sense of being the unfortunate heroines in a gothic horror, we trudged toward the flickering light of the cottage. When we got in and dumped our bags and snacks, it was in a muddy, musty cottage front. It seemed regular enough — extremely low cielings that troubled everyone but me (being five foot tall), weird, squashed design, as cottages have. There was a serviceable enough kitchen and a pervasive smell of mould.

This didn’t much bother me — much newer cottages than this have that mould smell. Old buildings have damp problems, that was nothing new. What was unexpected was the way the two participants familiar with the location practically skipped in excitement when we arrived.

‘You MUST take the tour!’ they said.

Well … alright. I looked to the others who had gotten there before us. One said, ‘There are a lot of dead things.’

We went upstairs for the tour. Mostly, it was an oddly barren museum with lots of creaky floorboards and odd ups and downs. In the way of very old houses, several bits had been added on over time, none of them, somehow, at quite the same level.

I have a fear of falling through the floorboards of old places like this, so I was already on edge.

But stranger still was the emptiness of the rooms. Largely, it seemed the exhibits could have all been fit into one or two rooms, not spread out over a dozen. Probably the strangest thing was the way in which the museum’s subject, a local historic author, gazed at you from *every room and hallway*.

There was AT LEAST one face in every room. A bust, a photo clock, a portrait, a painting, a photo.

Combined with the barrenness of these rooms, the sense that they had been stripped somehow, it made the faces all the more potent.

There were also a lot of dead animals. Taxidermy. I’m not as spooked by taxidermy as I could be (thanks, weird animal college!) but they still aren’t exactly comforting.

So we travelled up and downstairs in a weird yo-yoing fashion, taking tight corners and steep steps.

Our guide excitedly warned us of the mannequin room. She is not the kind of person who normally warns people of scary things. Joh is always honest with me. They know what will scare me and what won’t, and I trust them to let me know which is which.

This was the strongest warning I’d ever receieved from them.

And so, steeling myself, I went up, knowing I had to know.

Our friend cautioned me: ‘It’s RIGHT THERE when you go up. It’ll startle you.’

Even with this warning, I was unprepared.

The pictures don’t really do this justice. You walk up and as you glance through the banister in this tiny loft room, you see a young boy lying on the bed reading a book. He is, at most, a few steps away from you. Something about his positioning and nearness makes him horribly uncanny. His position is too real, even though he obviously is not.

Worse, as your eyes track down, you realise there is another manniquin under the bed, staring up at him.

I didn’t get pictures the first time and didn’t want to go a second. Joh therefore took these for me.

Note the feet under the bed in the second picture. Following that happy journey, we were brought to the library, where most of the dead things lived. There was a spot there where the floor positively bounced when you stepped on it. We joked that there was a trapdoor there.

There was. It had, apparently, started to cave in, so one of the staff had put their carjack under it to hold it up. For safety reasons, we were not able to explore the trapdoor that led under the house.

Some photos of the library. There were many more taxidermied animals than I can easily share in one post, tucked around the room in shelves and under tables. So, with the tour over and feeling decidedly more creeped-out than when we arrived, we settled in for an evening of gaming. We first all played in the library — it had the largest table — then split into two groups. I went back to the kitchen with the group looking for a more casual game while some folk crocheted. I felt a lot more comfortable in the kitchen. We were several rooms away from the library and could hear nothing going on in there, but when they returned they all seemed happy enough.

Creepy and full of faces though this cottage was, we had a really enjoyable evening. The participant who’d opened the location to us suggested he’d like to host more writing groups and workshops there in future. We all agreed it was a great idea — although I suggested they should maybe not show everyone the manniquin room if they wanted people to return.

Before we left, Joh really wanted to get a photo for themself of one of the busts. I went with them, and we both took a photo. They showed me theirs, perplexed and delighted. ‘Accidentally caught some paranormal activity,’ they joked.

Here is the image: That was not consistent with the lighting AT ALL. Obviously, it wasn’t actually paranormal activity, but it made a thematically perfect close for our adventure in the museum.

We said our goodbyes to our friends and went back out. Now, instead of looking from the dark toward the small light of the cottage, we gazed out into darkness from the light of the cottage. Honestly, I was eager to return to the darkness, where there would be far fewer faces. And that’s the story of the lovely evening I spent in a very cursed author’s cottage.