What to name your (book) baby? 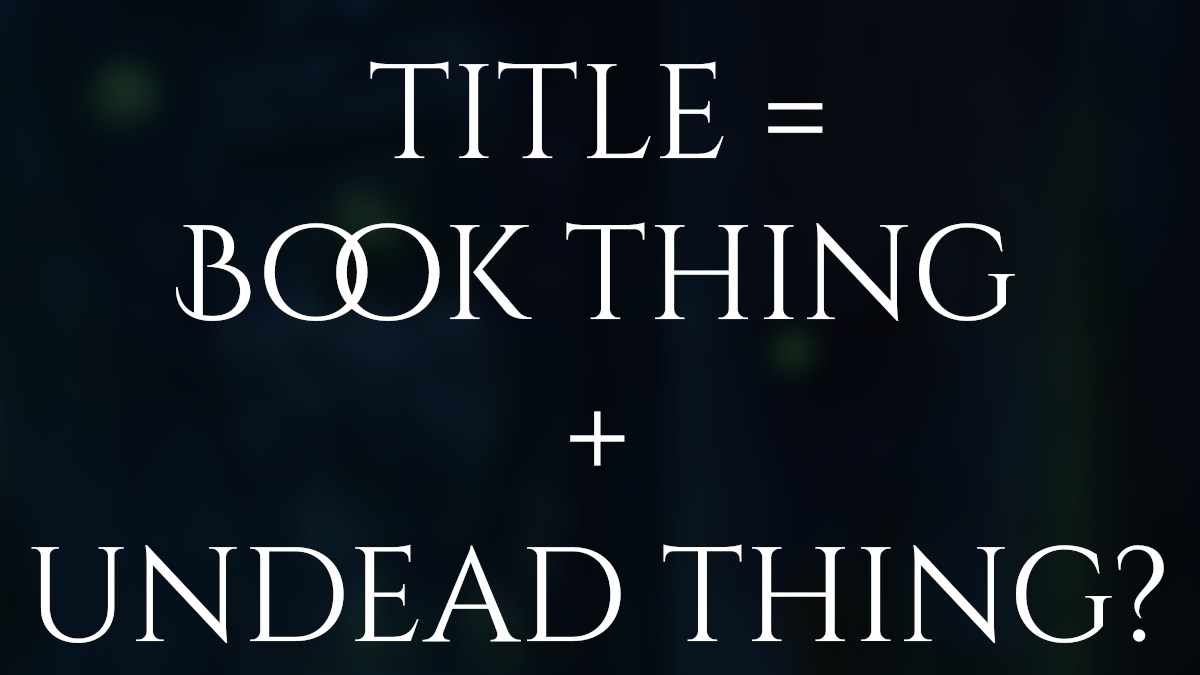 This post was originally supporter-only and was posted February 2020.

I have always been terrible at titling. Character names don’t much stress me out, but I’m not good at them. I go for names that have a certain feeling and match the aesthetic of the setting. I largely make them up, and never really spend time prowling baby names sites the way so many of my writing fellows do.

I did even less with character names in the TOMBTOWN books. My main requirement was that the names sounded evil, like the cartoonish villains in so many traditional fantasy stories. This was, to a degree, part of my worldbuilding — it not only fit the aesthetic of the setting, but also said a lot about these characters. They are people who see themselves as villains, who cultivate that image. Why they do that — well, that comes more and more into focus as the books go on, but I think it’s pretty clear that at it’s base, it’s reactionary to being outsiders.

Titling books though is harder. I can’t just slap together interesting sounding syllables or crib interesting names from mythology or etymology. It has to be meaningful, reflect the tone and content of the book, and also be recognisable.

BOOKS & BONE was originally TOMBTOWN, which became the series title. It changed in part due to current title conventions and in part because TOMBTOWN sounds too modern for the setting when used outside of context. Additionally, it wasn’t really the story of Tombtown — it was the story of Ree, who is both a librarian (books) and a child of necromancers (bone). It also played nicely into a line from the book ‘The others believed in blood and bone. Ree believed in books.’

I can’t say I’m fully happy with that title but it’s professional enough to do the job. It ticks certain boxes for legitimacy and it’s an original title. It tested better with early readers than TOMBTOWN did as well.

What I didn’t anticipate was the way that by choosing that format, I would be locking myself in. The habit with many series (especially now, when publishers frequently forgoe numbering and listing the series) at the moment is to have a titling format to show that books are in the same series.

To play into that and present as part of that trend, I’d have to name each of my books in this format. So for TOMBTOWN, following on from BOOKS & BONE, it’d have to be ‘BOOK THING + UNDEAD THING/ANTAGONIST’ for each book. It’s easy enough to create depending on what the feature of each book is — ‘Vellum & Vampires’ or ‘Parchment & Paladins’ — so in that sense, the branding would be easy.

And it worked for the BOOKS & BONE related short stories as well, which I *did* choose to follow this format with to a degree. (FAMILIAR & FLAME, TINKER & TERROR).

However, as I write Book 2, the working title ‘PARCHMENT & PALADINS’ seems less and less apt. In fact, I don’t think a ____ & _____ formula is going to cut it. Yet I’ve felt tied into this format. Will people think I’m unprofessional if I break from it? Will it be less clear that it’s a series?

But I *do* clearly mark and number each book as part of a series, so that should be clear enough. And additionally — does it have to matter?

I still feel antsy about it, but I think I’ve decided to move on from this format. I want Book 2’s title to better reflect the mood and content of the story, and not be tethered to an ill-fitting format just because that was what worked for Book 1.

So the tentative working title for the sequel to BOOKS & BONE is currently THE BEAUTIFUL DECAY. And maybe that will change on the journey to completion and then publication — in fact, I think it’s likely to. But already I feel more comfortable knowing that it’ll have a title that fits THIS book more than it does the first.

Anyway! Those are just some thoughts. I’d be interested to know what you think re: titling books and series, having title formats, and the kind of titles that work well for you. I may even at some point come to you with a couple titles and see which you like best!