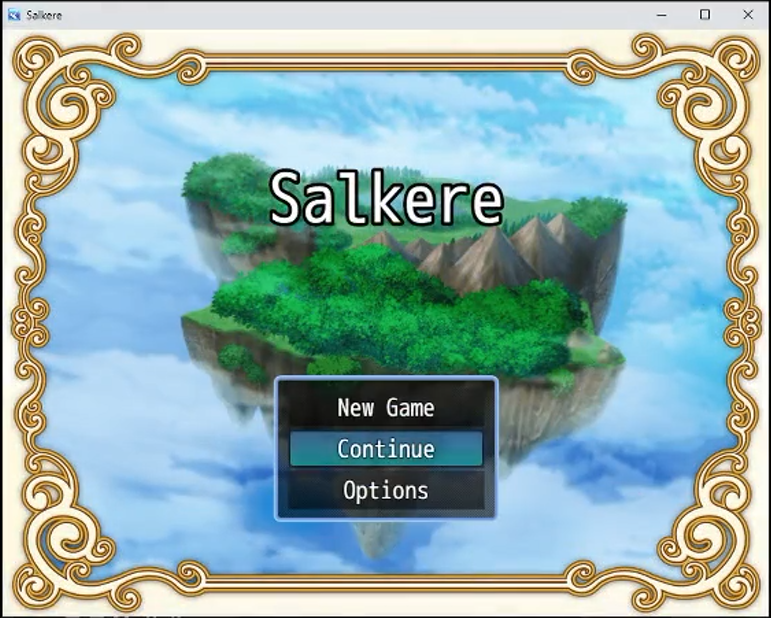 What are you making?

In Salkere, you become Velkar, an excitable and procrastinating magic student looking to start a new life in the wilderness of remote village of Salkere. But all is not quite as it seems, and despite the beautiful trees and friendly creatures, there is a terrible curse on this village and all who settle here.

Salkere is a low conflict, zero combat story game. Heavily influenced by my background in text games, in many ways Salkere is a text game with added mechanics and visuals. You explore the world and interact with the environment and people in it, but ultimately all of the story is resolved through text. It’s a very small game and my first attempt with RPG Maker, but I am to make it as fleshed-out and satisfying as I can within this small environment, with characters who I hope will leave a lasting impression.

Obviously I’m very new at this! I think text games give me a good basis for making a branching narrative but everything else is quite new to me (beyond a love of messing with the TES Construction Kit to mod Morrowind as a teenager). The deeper into the project I get, the more complicated the things I need to learn. But I’ve made a lot of progress in quite a short space of time and I’m hopeful I’ll have this game out within 3-6 months.

Moreover … I’m genuinely really enjoying the process. I’m enjoying developing the new skills, I love getting to play with new software, and above all I’m enjoying creating this story.

There is, however, still a LOT to go.

I hope to document a little of my process as I work on it for anyone who is interested. To begin with, the video above gives you a first look at the intro to the game, and below I will explain a few screenshots from further in. 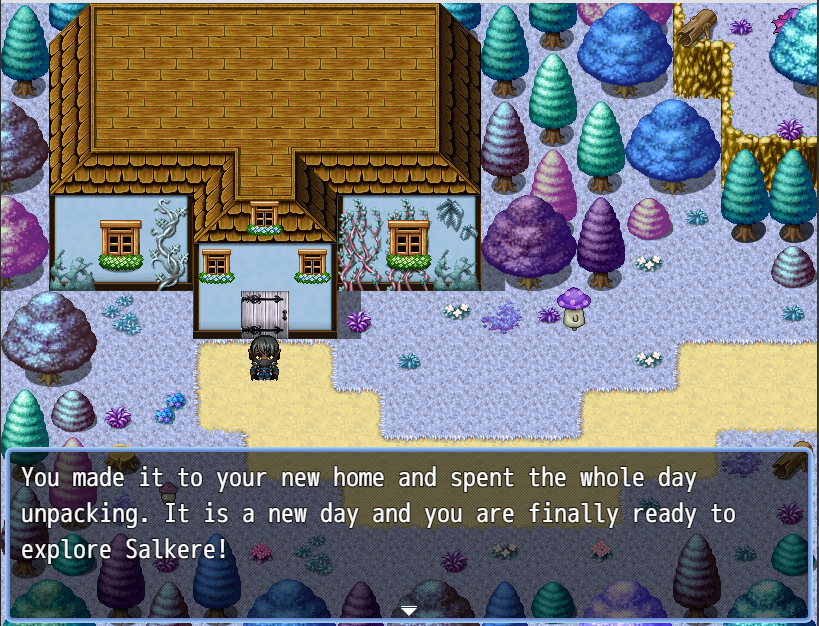 You start the game of Salkere outside your house, ready to begin exploring this village and meeting its creatures. In this first view of Salkere, it was really important to me that you immediately got a sense of the magic of this place — hence the mystical forest tilesets and the strange creatures wandering around. All of the creatures here are interactable. You will never kill any creatures in this game, or ever be asked to. 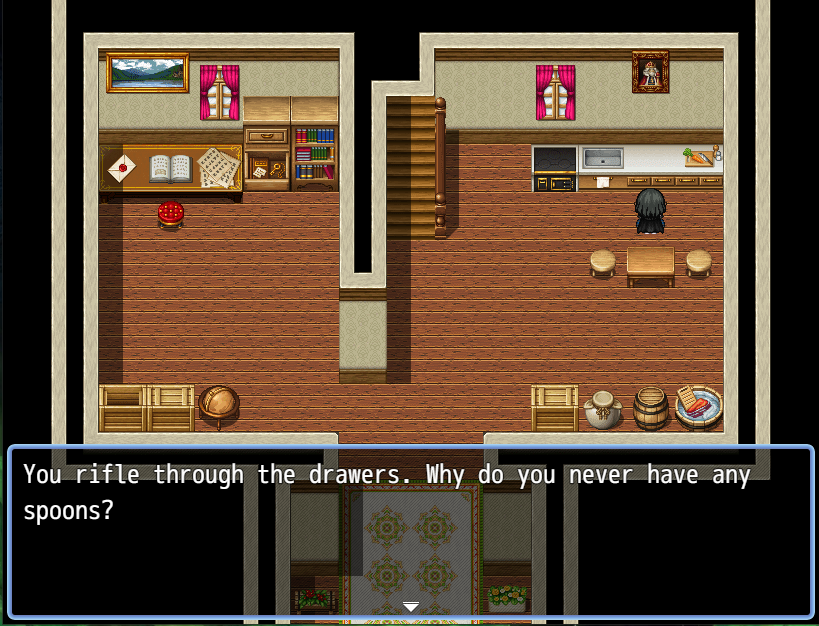 Here we have the ground floor of your house, and the first interior cell I’ve ever made in RPG Maker. It took a LOT of learning to make this look right, because I’m operating with a limited tileset, but I’m overall really happy with the result. You can interact with every part of the house — including the work surface shown here, and as in all the game, you will either recieve a character or world-revealing text pop-up, an interaction with options, or (more rarely) an item for your troubles. It was my hope that as I’m keeping this game quite small in scope, that I could make each map count for more. 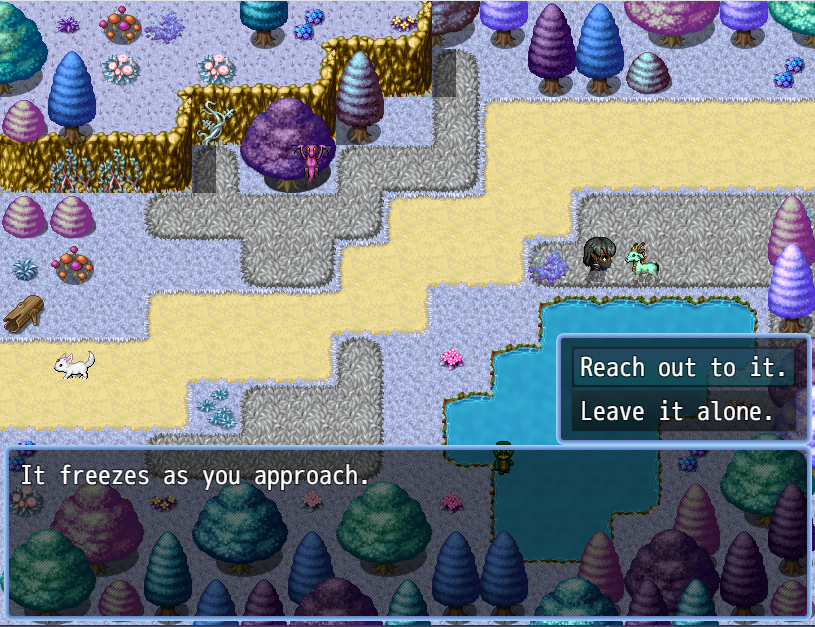 Here we have one of the early creature interactions with a classic prompt — Reach out or Leave alone. This is the basis of most of the non-verbal interactions in the game, and every creature has both a unique description and personality, but also a unique reaction. Ideally, if I get time, I’d like those reactions to change day-to-day depending on your actions, but that’s a secondary goal to completing the story. 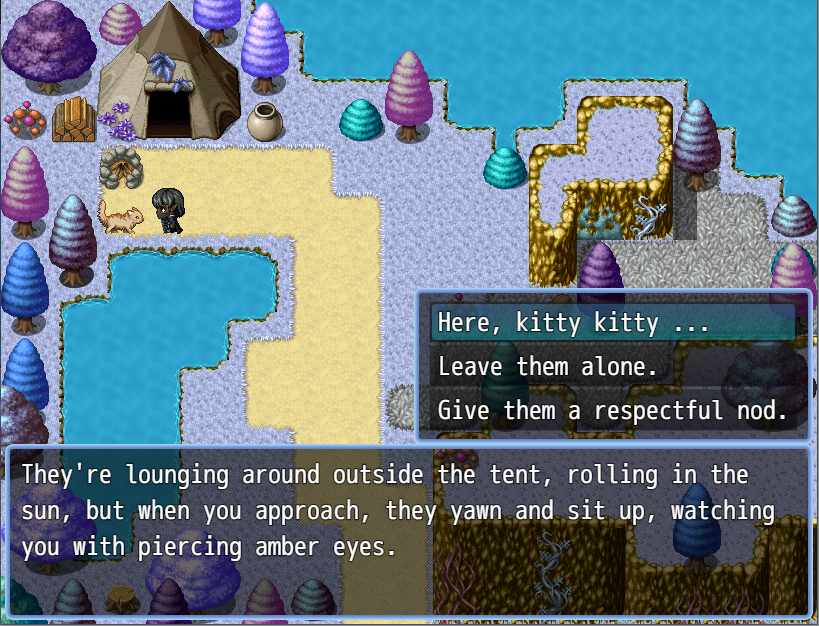 Here we have a completely natural cat. As you can see, the reaction options here have a little more nuance. Perhaps there is more to this cat than meets the eye? 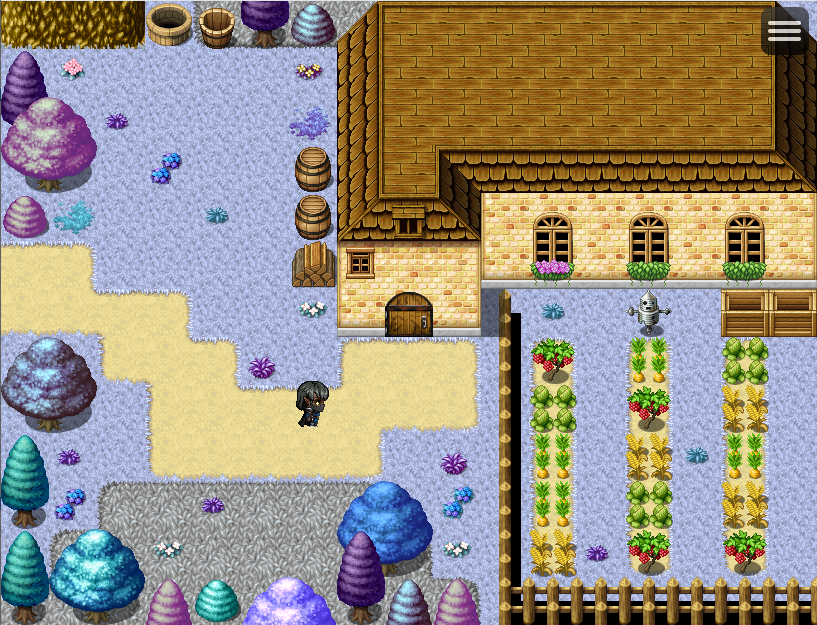 Nothing much to show here other than that I’m really proud of this map design, which took me a while to get right. This map isn’t populated yet with any events beyond a door to take you inside, but I have big plans for it! 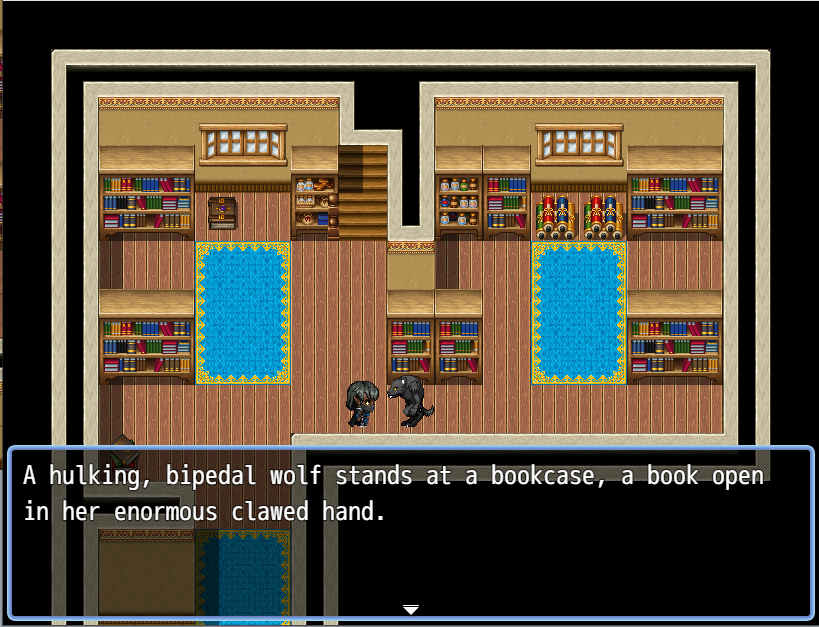 And here we get our first look inside the building with the garden. It appears to be a library of some kind, perhaps. The werewolf you speak with is one of the handful of inhabitants of Salkere, and your interactions with her affect not only her reactions but (hopefully) the progression of the story, if only in small ways. 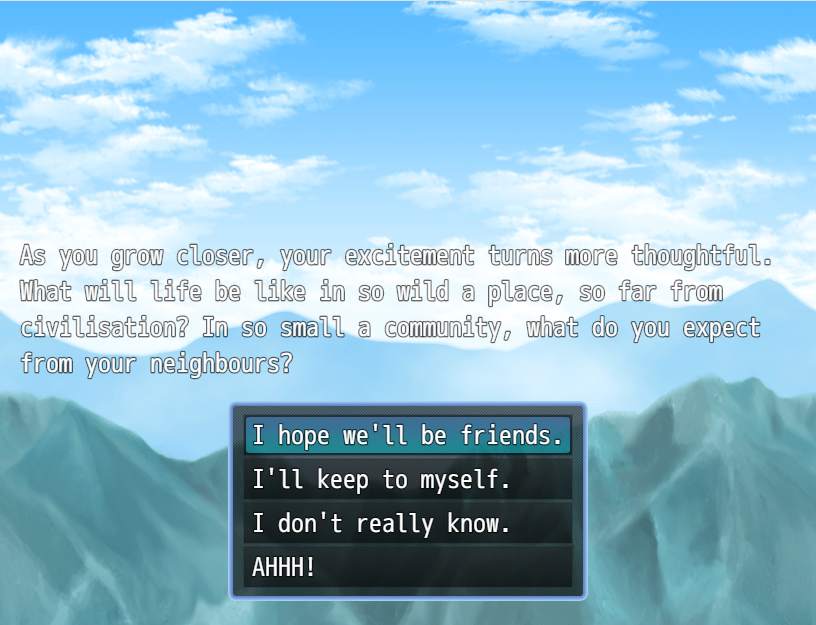 And finally, a screenshot from the story intro, where everything is described and you react accordingly. This format is not reserved for the introduction, and will appear regularly throughout the game as a way of resolving more complex story points. As I said, in many ways this is a text game with a little extra. The little extra just takes a LOT of extra work!

How can I support this?

So obviously this is a very time and resource-intensive endeavour, no matter how small I’m trying to keep it. And the more depth I put into this game, the harder that becomes.

Honestly, I don’t really have the funds to resource this properly and I won’t be able to release it until I do. So if you like the idea of giving money to an independent creator, consider supporting me on Ko-Fi so that I can fund the art and tilesets I need to finish this project. And also continue to survive, which is an ever-growing concern as a disabled creator.

Salkere will be released for free when I’m done with it, and if money is a concern for you (as it is for many of us), boosting and sharing my posts about it is a huge help, as will be playing it and sharing it when it is eventually released!

I’m also an indie author with a novel and several short stories published so any support you send my way helps me with that endeavour as well. 🙂

Anyway! More updates soon, I hope. And thanks for reading.