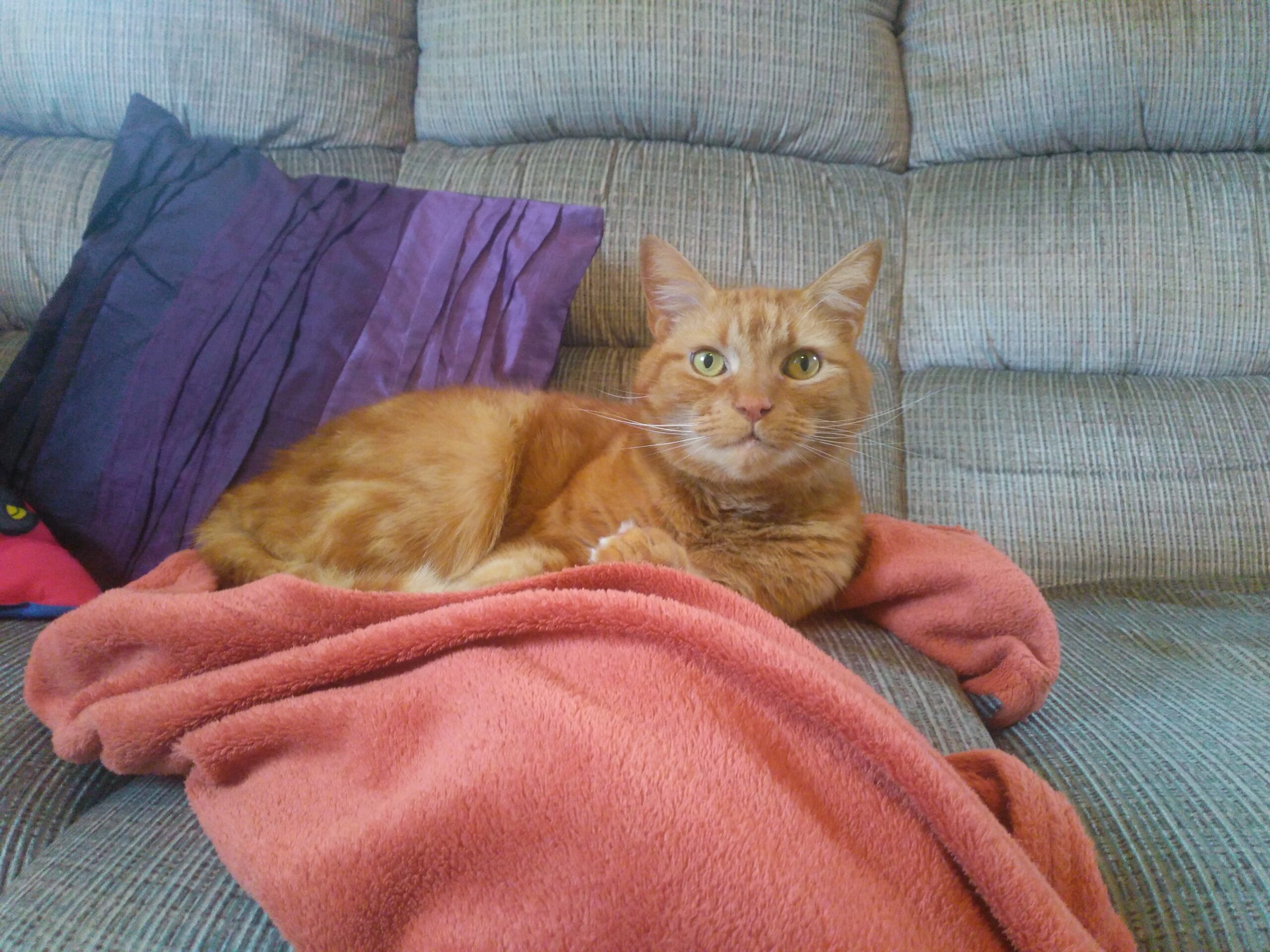 Have I ever told you about the fearless spider-catcher (and their cat, Merlin)?

Once upon a time, a couple brought home a very odd cat because their neighbour didn’t want him anymore.

He was ginger-furred, deeply curious, and keen on hugs.

He was also, by all accounts, a coward.

The cat, of course, is Merlin. And the couple is myself and my partner, Joh.

None of those are things *particularly* associated with cats (wrongly, but even so).

This isn’t a problem for anyone.

It’s amusing, though. This is a cat that will gently tap the wall beneath a fly and then make his ‘feed me’ meow in the hopes that someone will catch it for him and deliver it directly into his mouth.

The *one time* I saw him catch a fly, he caught it so gently between his paws (claws retracted) that when he opened them it flew away again completely unharmed and he was *completely fine with that*

But then there’s the spiders.

Spiders, for Merlin, fall into one of two categories:

Small. This is an entertainment and a friend. I once observed Merlin watch a tiny spider crawl all the way up to him until it disappeared into his fur. He then fell asleep.

Big. This is terrifying and requires screams of terror and also hiding. Sometimes he will track them from a distance (badly).

For a long time Merlin would come and get either me or Joh when he found a spider, meowing in panic, running near the spider to show us, then hiding behind our legs.

The bravest thing he’d done for years was when he followed it across the kitchen (from a distance) until Joh put a clear drinking class over it.

At which point Merlin lost track of it and began to search the surrounding area in a panic. (It was 100% visible).

He has killed 3 Big spiders to date.

Each time seems to have been born out of panic, and each time has happened when we were asleep. He would scream in the night until we woke up and let him into the bedroom. We didn’t know why.

When we saw the first spider we were so sure that he couldn’t have done it that we asked my sister if *she’d* killed it during her visit the previous day (which says a lot both about Merlin and about my sister).

But when we removed the body, he started checking the spot.

The second spider he proudly showed us when we got up in the morning. He ran over to the dead body, shook it a bit, *spooked himself with the body*, then ran around the house in either triumph or panic.

The third spider was just a few days ago. We woke up to a huge dead spider half-buried among Joh’s clothes (one of Merlin’s preferred sleeping spots).

So that’s three spiders in 9 years.

Although Merlin is fearless (when he has to be) and fearsome (at least as fearsome as Winnie the Pooh), he still prefers Joh to catch the Big spiders and safely release them outside — which I prefer as well.

And he still screams and hides when he finds them.

Did he learn this behaviour from me? I’m not keen on spiders and usually get Joh to catch them. Why is he so friendly to small ones and so afraid of the big ones?

Anyway, that’s the story of how my cat has managed to catch a whopping three spiders in nine years, and why we’re all very proud of him.