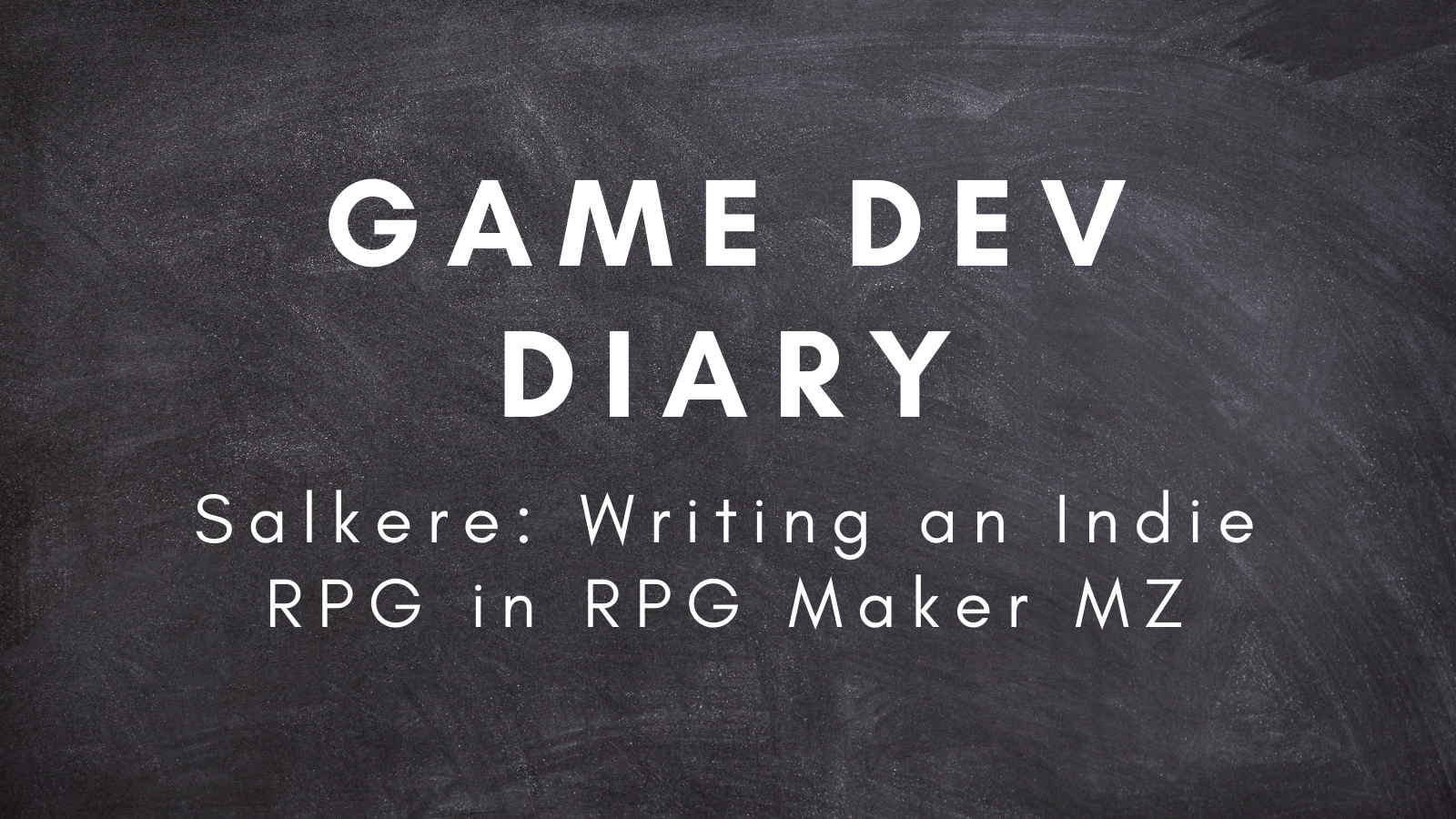 Salkere development continues! If you’ve been following it at all on social media, you’ll know the main thing I’ve been crowing (and crying) about is branching dialogue, which is a large part of writing this kind of story-driven game. So I thought I’d talk a little about that and give some insight into the process. 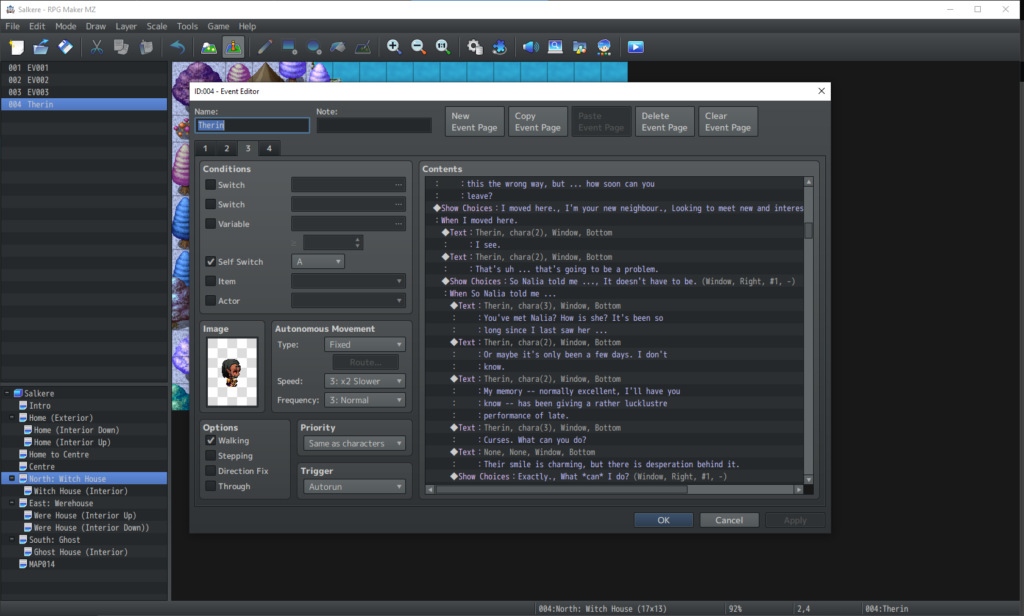 So, as a novel writer, I am no stranger to writing fiction. However, non-linear fiction is a very different experience. There is not a progression from A through to D so much as from A to B1/B2/B3 to B1C1/B1C2 and so on. This is a game where the main mechanic is through changing the story through your decisions, and therefore the story branches into several possible stories.

My job is to craft and keep track of these branching stories, make each of them feel fulfilling and interesting, and try to give the game as much re-playability value as I can, all while keeping a firm enough grip on the story to stop it spiralling out of control. As you might imagine, having every choice you make have a knock-on effect can quickly become quite the monster for only a few minutes of gameplay.

With this in mind, I have fixed ‘key decision points’ in my mind that have a larger effect on the storyline. This means that in total, there are only 3 ‘major’ story paths, and each of those adheres to roughly the same story but with tweaks depending on which characters you choose to interact with.

But! I still love the interactivity of smaller options, such as the flavour of dialogue you choose. This means there’s a lesser tier of ‘minor’ story paths which only really affect the immediate dialogue interactions, but not the over-arching story. The hope is that these minor paths are still satisfying and give the player more of a sense of control and agency with their character, without splintering into dozens of new paths — rather, each one just has a unique dialogue response or short dialogue path that then returns to the main story.

The bottom tier of branching is illusory. These are dialogue options or actions which have no effect on the story beyond allowing you to characterise your character more. Again, this is to give the player more to do and a better connection with their character without terribly increasing my workload. Or such is the plan!

So, with all that in mind, I’d like to go a little bit into the different kinds of writing I do in the game … 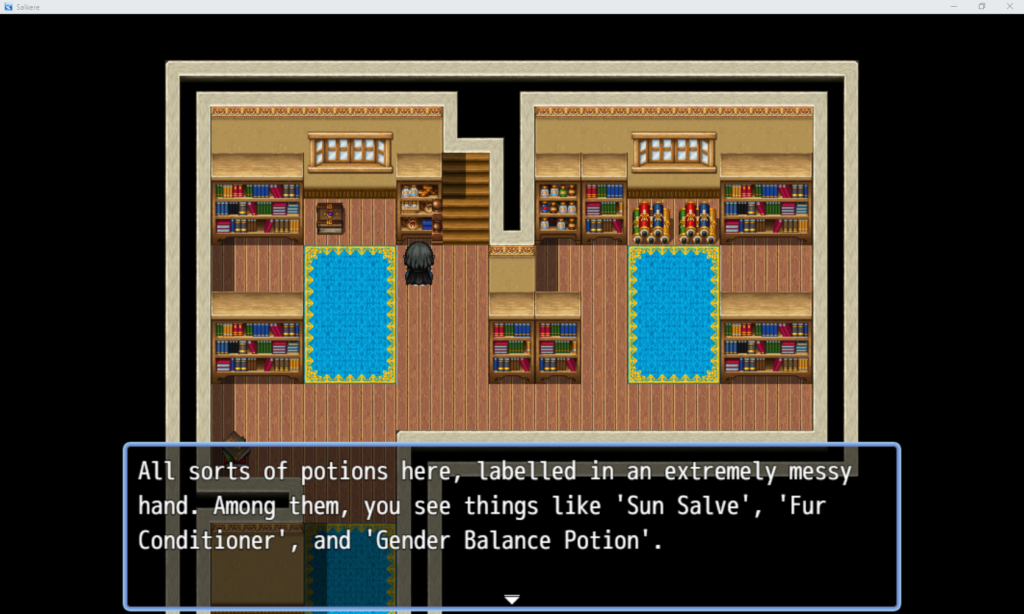 Object interactions are often the most simple writing I do for the game, but they’re very important for the sense of place and for developing the story. In Salkere, you can walk up to and interact with pretty much any object or creature you see, and get a text description that comes up describing what you are looking at or even giving you an option for how you’d like to interact with them. I use these to create more of a sense of place than the art alone would provide, but also to reveal more about Velkar, the protagonist, and their character, as well as about the characters who own the objects.

Something I’d like to do is have some of these interactions change depending on which stage in the quest you’re at or what decisions you’ve made. That’s kind of a stretch goal for myself though. The main thing is to get all the interactions into the world and to get the story finished! 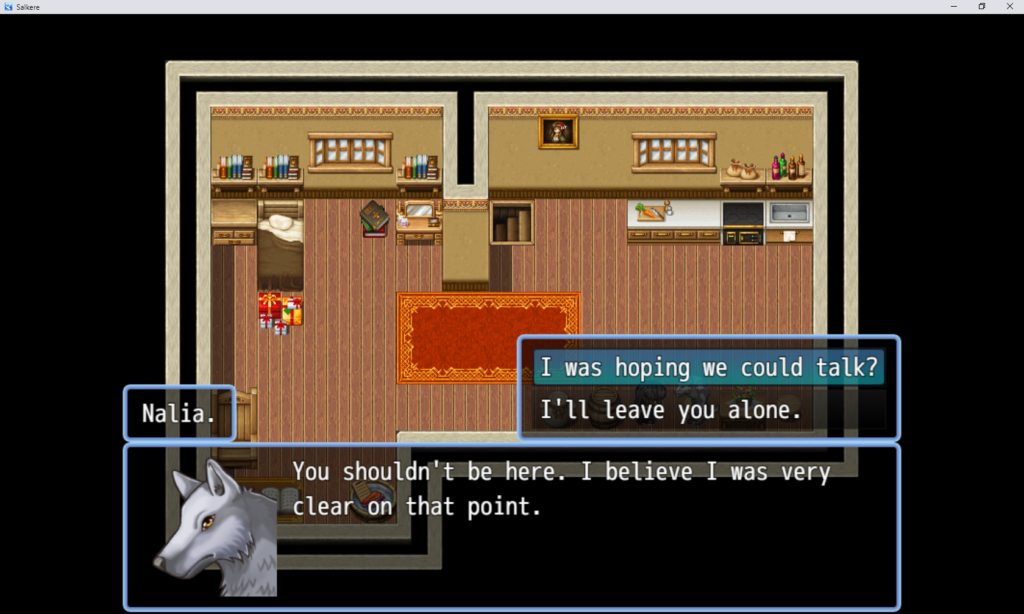 Character interactions are one of the most complex things I have to write as part of the process. This is the dialogue, and where most of the action happens. You can walk up to any character in Salkere and begin a conversation with them, and depending on the game stage, your previous decisions, and what you choose to say to them, you can have completely different conversations with completely different outcomes.

This involves a lot of branching and I’ve also begun to implement a kind of ‘dialogue menu’, which is to say that you have several topics of conversation you can choose, and once you’ve completed one, it brings you back to the same original options so that you can pursue other paths. Some of these become locked or unlocked depending on your actions. It’s not incredibly sophisticated — it’s hardly a new way of handling dialogue — but it is very complex to keep all the branches straight — certainly for a beginner, like me.

Many character interactions also include pop-up descriptions of what the character is doing, trying to describe more of a physicality than you can get from just the art. I try to differentiate those from the actual dialogue by not having them nametagged or portraited, unlike the above example. 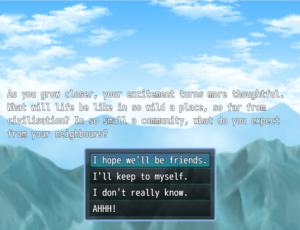 Finally, we have story interaction, such as depicted in the image above. These sections take you away from the main gaming interface. Instead of walking through the world and then triggering dialogue that way, these interactions are entirely textual. That means they rely a lot more on descriptive and internal monologue than do the parts of the game that focus more on the art, but essentially they work the same way that the character interactions do — you are responding to the descriptions and sometimes dialogues that pop up on the screen, and the story changes depending on what you choose.

My hope is that these give me more scope to explore sequences I wouldn’t be able to include in the game otherwise due to animation and programming restraints. The hope is also that they provide more of a sense of atmosphere. I suppose we’ll see what people think of the final result!

Anyway! That’s just a quick look into the writing process for Salkere. If you’re familiar with interactive fiction or text games, you’ll find that there’s not really a whole lot of difference in the process.

How can I support this?

So obviously this is a very time and resource-intensive endeavour, no matter how small I’m trying to keep it. And the more depth I put into this game, the harder that becomes.

Honestly, I don’t really have the funds to resource this properly and I won’t be able to release it until I do. So if you like the idea of giving money to an independent creator, consider supporting me on Ko-Fi so that I can fund the art and tilesets I need to finish this project. And also continue to survive, which is an ever-growing concern as a disabled creator.

Salkere will be released for free when I’m done with it, and if money is a concern for you (as it is for many of us), boosting and sharing my posts about it is a huge help, as will be playing it and sharing it when it is eventually released!

I’m also an indie author with a novel and several short stories published so any support you send my way helps me with that endeavour as well. 🙂

Anyway! More updates soon, I hope. And thanks for reading.