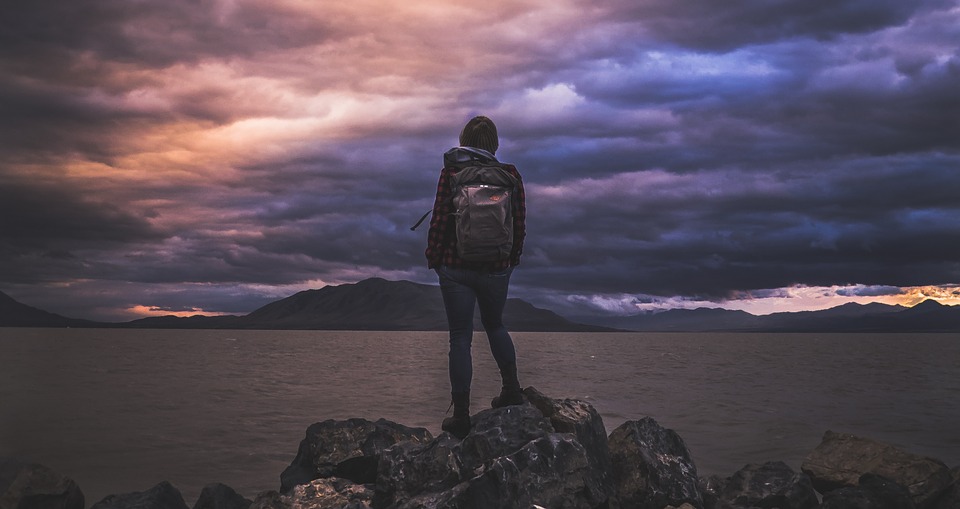 ‘I think … I think maybe I’m in love with a ghost,’ he told his sister one morning.

They’d met at a café for breakfast, as they often did. His eyes were low. She watched him, her mouth twisting to one side. ‘I don’t know,’ she said. ‘I didn’t think ghosts existed.’

‘She’s … I don’t know how to explain it.’ He ruffled his hair. ‘I only get glimpses of her. Long hair. An impression of a shape. She only appears at the river, at night.’

She folded her hands in her lap and tried to keep her expression smooth. She never wanted her brother to think he couldn’t talk to her.

‘It … doesn’t seem like a lot to go on,’ she said slowly, but he was already shaking his head.

‘I know what you’re thinking,’ he said. ‘But it’s not like that. I know her. I really know her. We talk. Every night, we talk.’ He drew a shuddering breath.

‘It was just whispers at first. She wanted to know why I was there. I wanted to know about her. She told me about the river; she’s been there a long time. The things she’s seen … but I tell her about my life, too. She has this way of looking at things that makes everything … make sense. I feel like, when I’m with her, I can finally breathe.’ He smiled, but it looked painful.

‘Then … shouldn’t you be happy?’ She watched him warily. He’d been in love before, but the way you fell in love with a picture, or the story you tell yourself in your head. Women with bright eyes and wide smiles that had no room for gentleness or worry.

But this ghost thing was … she didn’t know what it was.

‘She stopped coming,’ he said. He sounded squeezed. ‘I told her that … that I wished I could see her, face-to-face. And I haven’t seen her for three days.’ His shoulders raised and he seemed to shrink in on himself. ‘

Later, when she’d consoled her brother and watched him fall into a pain-clutched sleep, she waited for the last of the sunset to seep below the horizon and set out for the river.

‘I know you’re here,’ she said, looking down from her brother’s rock perch as the water rushed black and loud below. She raised her voice. ‘I don’t believe in ghosts. Why are you avoiding my brother?’

–He’s told me about you– came a voice in her ear, soft as trickling water. She spun in alarm and lost her footing. She plunged toward the rushing dark, but something caught her and pushed her back onto steady ground. Still, she could see nothing.

She touched her coat where the ‘something’ had caught her. Her fingertips came away wet with river water.

She wondered if she had made a mistake, coming here.

–He says you are brave, and that when you were children, you would chase away his tormentors with a stick and a scream–

–Please do not be angry–

Always, the voice in her ear, but no body attached. She stood straighter. ‘Why are you avoiding him?’

–He loves me. But he will not love me if he sees me. I am not what he thinks. I do not want him to fear me–

A memory struck her of when they were children, and her brother would write love letters and then never post them. ‘Why not?’ she’d asked him. ‘Why not post them? Why not tell them to their face?’

She tried for a more understanding tone, letting the lines of her body soften. ‘I think he would understand better than you know. And neither of you are happy avoiding each other. Maybe it would be better to try?’

Silence from the river ghost.

She sighed and scuffed her boot against the stone. ‘Why not try first with me? See how it goes?’

–I do not want you to fear me, either–

‘I don’t fear anything,’ she replied. ‘Well, except retail work.’

–So he tells me– the voice replied, and it sounded almost fond. –So be it–

The river slowed and then stilled. She raised her chin, determined to hold true to her word. She dared not think about what could possibly stop a river from flowing.

Then, a ripple on the surface. Green-black hair, slick against narrow head. A face, mottled blue-grey, with eyes like live coals. A narrow slash of a mouth, black with thin, fish-like teeth.

–Well?– The creature looked down. One clawed arm reached out to clasp the other, like a shy child.

She was, in all appearances, something out of a story. Oily skin stretched tight over long bones. Claws and teeth. A sharp ridge that followed her spine.

The sister smiled. ‘I knew you weren’t a ghost.’

‘Maybe a little,’ she replied. ‘Maybe at first. I don’t know if he told you this, but my brother is brave, too. And he has always been a sucker for beauty.’

The next night, she led her brother through the dark to rock at the riverside. At the last minute, he clutched her hand, and it was like they were children again.

‘What if she doesn’t like me?’ he whispered, and his eyes were full of moonlight and worry.

‘There’s only one way to find out for sure,’ she replied. She nudged him toward the rock.

When the creature arose, amid the sudden, shocking stillness of the river, he stepped back, a gasp catching in his throat. The creature lowered her head. She started to sink. –I’m sorry–

‘No!’ He leapt forward to crouch at the edge of the rock, so that their eyes were level. ‘I’m sorry.’ He offered her his hand. Shyly, she took it, claws curling. She rose higher and then peeled from the water, to step onto the rock beside him. Her dress, a thin brown thing that trailed like seaweed, swirled around her legs in a non-existent wind.

‘It’s really you,’ he whispered. Hesitantly, he put his other hand on her cheek. ‘My lovely River Ghost.’

The creature closed her eyes.

Quietly, the sister left. One day, she would visit again, and get to know the woman her brother loved. Maybe they would even become friends. But right now, swaying in the moonlight beside a frozen river, was a moment only for her brother and the River Ghost.

(Image by Free-Photos, used under CC0)