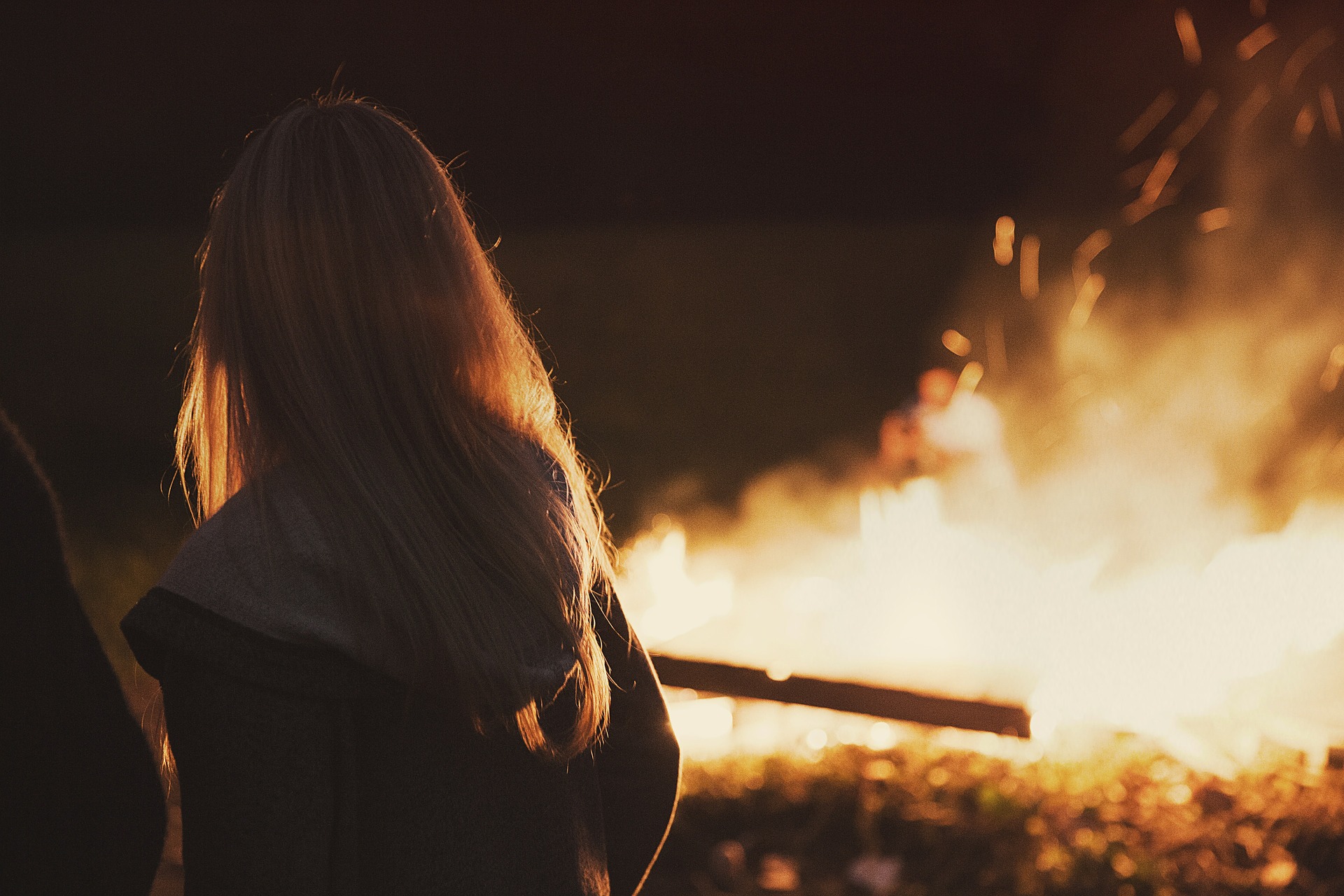 Their eyes meet across the burning glade. Fire still trails from the hands of the first, and the flames dance in her sad eyes.

The second is covered in ash. She hugs a cat to her chest. It buries its face under her arm.

The first recoils. The flames in her hands flicker; the fire around her dims, then brightens. ‘I didn’t mean to. It just … happens.’

‘Just happens?’ She coughs. Her eyes narrow. ‘A fine way to shirk the blame, when you’ve been caught flame-handed.’ The cat in her arms squirms, then resettles.

‘You don’t understand,’ says the first. Her words bite with pain, and the fire around her flares. ‘The fire is inside me. It’s inside me, and if I don’t let it out, I’ll burn up. That’s what happens to people like me.’

The second pauses. ‘Come to the lake.’

‘Come.’ She adjusts the cat in her arms, who gives the other woman a feline glare.

The first follows the second, dripping flame as if soaked in it.

At the lake, the second sits on a rock, letting her cat down beside her. She gestures to the rock next to hers. ‘Please.’

The first sits. The rock doesn’t burn; a blessed relief. She is so tired of killing.

The second fixes her with a look of understanding. ‘Tell me about it,’ she says.

She smiles: sad, encouraging. ‘Everything.’

So the first talks and talks. At first, the fire rages brighter. The flames at her hands grow and spread, and she is a woman on fire, a star about to explode.

When she’s done, the second sits close to her, hand-in-hand. The cat climbs into the first’s lap, purring its support.

‘And then?’ says the second.

‘And then … and then nothing.’ She seems surprised by the words. ‘That’s it. That’s everything I had.’ She pauses, looking down at their entwined hands. ‘What magic is this?’

‘Are you going to leave?’ The first cannot quite hide the fear in her voice.

Hesitantly, the first leans her head on the second’s shoulder. The second sighs, but it is a sound of contentment, not discomfort. The cat echoes the sound.

‘I had a dream,’ says the second. ‘A dream too real, as they sometimes are. That I would meet a girl who burned so bright she was hard to look at. That what I said to her would decide her fate, and mine.’

The first is quiet, cheek still on the second’s shoulder. ‘So what is our fate?’

The second smiles at the words. ‘What would you like it to be?’

This started as a microfiction but quickly grew far too long to toot or tweet. I didn’t want to get only a flash of this pair: I wanted to write the whole fairytale. I hope you enjoy it.

Image by Free-Photos from Pixabay, used under Pixabay License.